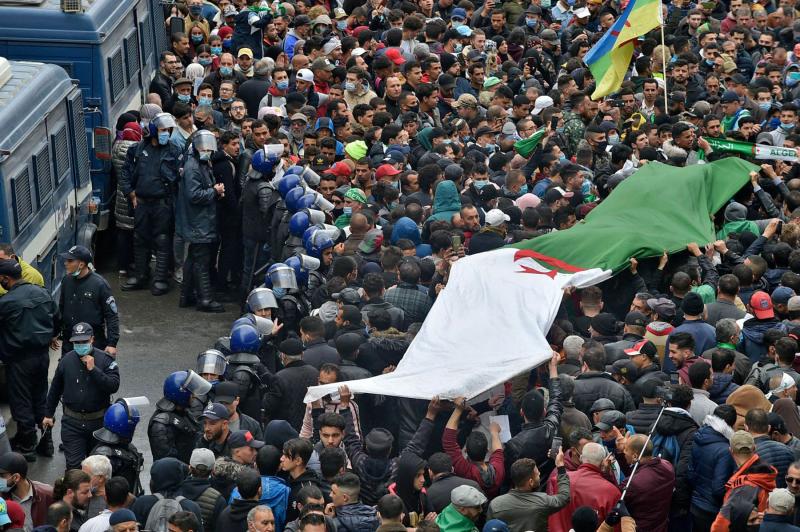 The Rachad movement followed with interest the resumption of the popular protests at Kherrata on 16 February 2021, at Khenchela on 19 February, and in most of the provinces of the country and in Algiers in particular on 22 February. The students also protested on February 23 despite the crackdown that reveals contradictions within the regime. On the one hand, a faction that is ostensibly pursuing appeasement through releasing a number of the Hirak detainees, and on the other hand, a faction that obstructs the former’s path and incites the security services to suppress the protest movement.

Rachad hails the millions of Algerian men and women who had decided to suspend the protests in March 2019 of their own free will and have now decided to resume them to prove that their peaceful and united movement is still alive and has never abated. They have renewed their rejection of oligarchic rule, chanting loud slogans such as “a civil state, not a military one,” “Tebboune is a fraud and puppet of the military,” “the people want independence,” “we have not come to celebrate but to throw all of you out.”

The protesters also clamoured the slogan “terrorist mukhabarat… down with the military mafia,” denouncing thereby the intelligence services’ intrusion and control over all aspects of political life and various institutions, especially the judiciary and the media. Thus, the protesters sent a strong message about the need to restructure the intelligence services by reviewing their mandate and legal foundations, structure, size, powers, and the modalities of public oversight on them, besides the need to scrutinise their political bias and violations of human rights as well as the measures to prevent them in the future. Only then will this body become professional and devoted to serving the people, rather than the tool to suppress the people, and ride shotgun for the illegal interests of a group of army generals, that it has been so far.

Rachad always stands by the people and supports their legitimate demands for the rule of law, dignity, and respect of human rights and fundamental freedoms.

The reactions this week of the remnants of the oligarchic clique in power indicate that they lost their mind and are becoming more isolated than was the Bouteflika gang before its collapse. Proof of this is the appalling staging of the « Abu Dahdah » case, fabricated from nothing, in blatant violation of the rules of criminal procedure, Abd al-Majid Tebboune’s agenda to organise snap legislative elections met with widespread rejection, or the provocative official TV channel’s coverage, under the control of the intelligence services, of the resumption of protests that led to great resentment among citizens to the extent that one commented, “lucky that you were not present to cover the November 1954 liberation revolution.”

The aim of the mediocre propaganda broadcast on public television is to exaggerate the role of Rachad within the Hirak protest movement, demonise it and scare citizens away from it by claiming that Rachad wants to take over the Hirak movement. Rachad reiterates on every occasion that it simply represents a drop in the sea of the Hirak that includes all spectrums of society and respects the principle of unity in diversity.

In the past few days, the Rachad movement took note of the dangerous developments with regard to the Algerian army’s participation in the French wars in the Sahel countries under the pretext of “fighting terrorism”. These include a hint in Abdel Majid Tebboune’s recent speech and a statement by Emmanuel Macron about Algeria’s presence in the N’Djamena meeting and his confirmation that Algeria and Morocco are to engage again in military operations in the Sahel. The recent statement of the Algerian Ministry of Defense regarding the deployment of soldiers outside the borders was not convincing to the Algerians anxious about the fate and lives of their army that some of the neo-colonial powers want to use as mercenaries to serve their illegitimate interests. The statement asserts that “the People’s National Army, heir to the Liberation Army, will only submit in its activities and movements to the authority of the President of the Republic, the Supreme Commander of the Armed Forces and the Minister of National Defense,” and that “the participation of the People’s National Army outside the borders of the country is determined by the will of the people in accordance with the Constitution of the Republic.” This ignores the fact that the president and the constitution were imposed on Algerians by force and do not have the slightest legitimacy, and that the will of the people has been trampled upon by the army command for a long time. The Rachad movement warns members of the army command who are involved in this dangerous path against pursuing it, as it is a betrayal of the sovereignty of Algeria and its martyrs. Rachad also appeals to the patriots of army officers to put an end to this path that threatens the unity of the army in the first place.

The Rachad movement calls for intensifying the activities of the Hirak protest movement within the framework of nonviolence and unity while taking preventive Covid-19 health measures. Rachad will cooperate with all freedom-loving people from all political and ideological persuasions to put an end to a hopeless, miserable regime that has become an existential threat to the Algerian state.